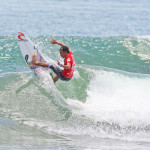 Putra Hermawan (Nusa Lembongan) claimed his second consecutive victory yesterday at the Quiksilver Open 2010 6-star plus rated Coca Cola ISC tour event at Keramas Beach in Gianyar, besting Dedi Santosa (Kuta) in a mesmerizing final that saw him take not only the win but the highest single wave score of 9.25 (out of 10) and highest combined two-wave score of 17.25 (out of 20) of … END_OF_DOCUMENT_TOKEN_TO_BE_REPLACED