You are here: Home / News / O’Neill Indonesia Announces the O’Neill Freak of the Reef Challenge in West Sumbawa from 28 June to 1 July 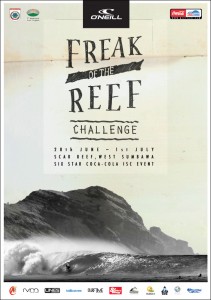 7 June 2012, Kuta-Bali: O’Neill Indonesia is proud to announce their first ever sponsorship of a Coca-Cola Indonesian Surfing Championship tour event, the O’Neill Freak of the Reef Challenge. In collaboration with the West Sumbawa Government and PT Newmont, this 6 star Coca Cola – ISC professional surfing competition will be held at Scar Reef in West Sumbawa between the 28th June and the 1st of July 2012.

“O’Neill are stoked to be on the map in Indonesia, and this is a great opportunity to kick things off by supporting Indonesia’s top surfers at one of Indonesia’s most legendary waves. O’Neill are also happy to be supporting surfing in Indonesia by holding a contest in West Sumbawa and look forward to working with the local authorities in developing the sport and supporting the local community in the years to come,” says O’Neill Indonesia’s General Manager Harry Radcliffe.

The West Sumbawa province has long been known by hard core surfers as a wave rich paradise, with waves like Scar Reef, Supersucks, and Yoyo’s offering up some of Eastern Indonesia’s best and most scenic waves, coupled with white sand beaches, clean blue water, and a still-unspoiled natural environment. This will be the third time the current Regent of West Sumbawa KH.DR.Zulkifli Muhadlihas supported a Coca-Cola ISC surfing competition and he is delighted to be partnering up with O’Neill this year.

“We are delighted and proud to be joining up with this global brand with such a long history in surfing,” said Mr. Zulkilfi. “We know we have a great natural resource with great potential in our surfing areas, and want to share them with others, so to have O’Neill come to hold a surf contest in West Sumbawa will help us realize this potential and for that we are thankful. We look forward to working with O’Neill in the years to come to help promote surfing here in West Sumbawa.”

The O’Neill Freak of the Reef is a 6-star Coca-Cola ISC sanctioned event, the fourth stop on the 2012 CC-ISC Tour. It offers up a total prize purse of Rp 50 million (approximately $5,300 USD) with Rp 15 million ($1,600 USD) going to the winner. The O’Neill Freak of the Reef is sure to draw the top surfers from Indonesia, who will be going all out in search of CC-ISC championship points, prize money and the prestige that comes with having won this inaugural event.

“The crew at O’Neill are super pumped to be holding our first ever Coca-Cola ISC event at such a heavy wave like Scar Reef,” says Tai “Buddha” Graham, O’Neill Brand Ambassador. “The Freak of the Reef challenge will be just that, a challenge to see who’s going to put it all on the line at Scar Reef, which on it’s day is one of the world’s most challenging yet perfect waves and in true Indo form breaks over a razor sharp coral reef. And there’s no limit to how big Scars can handle. It breaks from 2ft to 15ft with some of the hollowest waves you’ve ever seen. Let’s get it on!!”

Ex-World Tour pro surfer and O’Neill’s Asia Pacific Marketing Manager Rob Bain adds, “Yes, we’re really excited to be part of this Freak of the Reef Challenge at Scar Reef. With its reputation for full on gaping barrels and a beautiful headland backdrop, Scar’s is a legendary location, and the fact that there is a choice of other waves to surf in the area means that the surfing will be very high performance. I wish all the boys good luck, and hope they all score some epic barrels.”