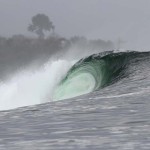 G-Land Surf Camp Aug 28 at G-Land dawned a clear day with a  nice 3-5ft of swell running into the bay.Some solid waves at the bottom end Kongs which was sampled by just a few guys,all reported nice walled waves going for over 100mtrs.Around the main section of The Ledge and Moneytrees where most of the visiting crew were surfing had crisp lines peeling through with about 30 … END_OF_DOCUMENT_TOKEN_TO_BE_REPLACED